When art collector Nik M. Fahmee was forced to stay home during the pandemic, he spent a lot of time staring at his walls.

It’s a good thing those walls – and many other surfaces of his home in Selangor – aren’t bare. With paintings in every room, he had plenty to look at and plenty of time to think.

He remembered the past, life, joy and sorrow. He reflected on his childhood and what it meant to him to raise a family.

An image in a painting can spark a memory – of a marriage proposal, a happy decision, or a difficult conversation with a loved one.

“I thought about my art collecting journey and the relationships I built. And then I wrote about those things, first daily, and when the restrictions were lifted, weekly,” said he said in a recent interview.

Fadilah Karim’s colored pencil sketches took him back to his school days, where in retaliation for a friend slapping him, he cut off her ponytail with a pair of scissors and threw her out the door. moving school bus window.

The book “Ginger Biscuits” by Nik Fahmee, which is his personal and poignant collection of stories and selected artworks by Malaysian artists. Photo: Blue Monkey Press

A still life by Ahmad Zakii Anwar of a papaya reminded Nik of his late grandfather who loved the fruit.

“He loved his papayas. He took it after almost every meal. He especially liked them fresh. He passed away when I was 10. I remember the phone on the piano ringing and my dad answered the call, then my mom came up to him and hugged him and they both cried. My mother was the eldest daughter. She stopped cutting and eating papayas for a long time. She couldn’t bring herself to do it. Such is grief,” he wrote in one of his stories.

An oil painting of a goldfish by Samsudin Wahab recalled how a young Nik wreaked havoc at a wedding when he greedily gobbled up the goldfish in shape baulu (traditional Malay pastry) signified as a wedding hantaran (part of a wedding dowry).

“Everyone was looking at me. Who would have thought that the head of the goldfish would come off so easily! My mother rushed forward, apologized profusely, and pulled me out. Once in the car she gave me the biggest and longest geram cubit (pinch) ever granted to any child in the world. For a while I was known as ‘Budak Makan Hantaran Kepala Bahalu Ikan Mas’. I was a legend,” he says. 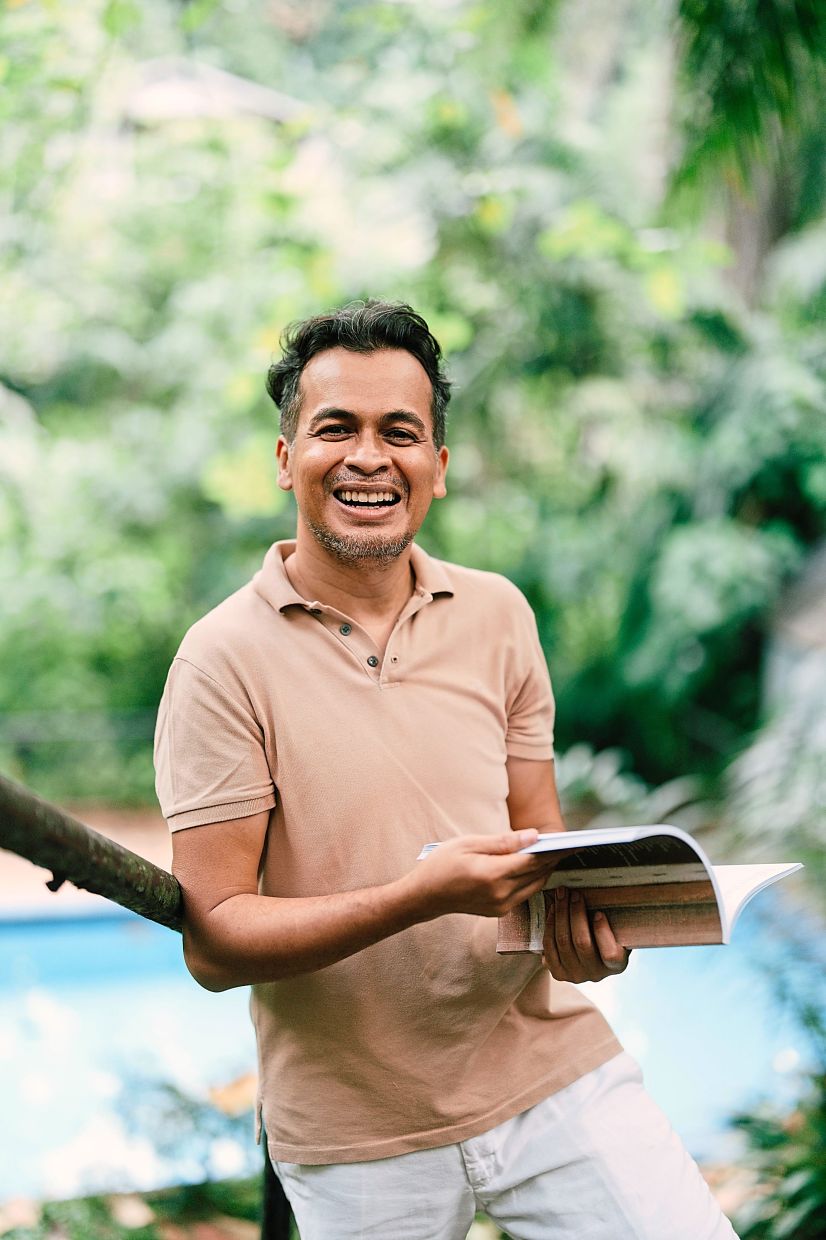 “A guy wrote me that he didn’t know me and he didn’t know art, but he loved stories. Another woman, who knows the art world, told me that she wanted to hug me after reading the book,” says Nik Fahmee, author of “Ginger Biscuits.” Photo: Saiful Chin

He’s built his art collection – which he displays in his home – over nearly two decades, adding pieces whenever he comes across something that speaks to him.

“I don’t buy a painting or a sculpture unless it resonates with me. Every piece of art in my house has meaning to me. With one or two exceptions, such as an artwork by a Filipino artist who is a relative, all of the artwork is by Malaysian artists. I love supporting the local art scene and I also love how accessible it is to meet these artists and get to know them a little better,” says Nik.

The idea of ​​the book

When he posted his stories online, people told him how much they loved them. There were hundreds of stories, written over a period of over a year.

Then they started asking for a book, and Ginger biscuits was born.

“When I started this project during MCO (Motion Control Order), I never thought I would ever compile it into a book. I was just writing for fun at home, right? When I was compiling the stories, selecting which ones would be in the book, I told my wife that these are really personal stories, so it’s kind of like an exhibition, you know? But I was going to be 50 this year , so I was like, damn it, do it,” he laughs. 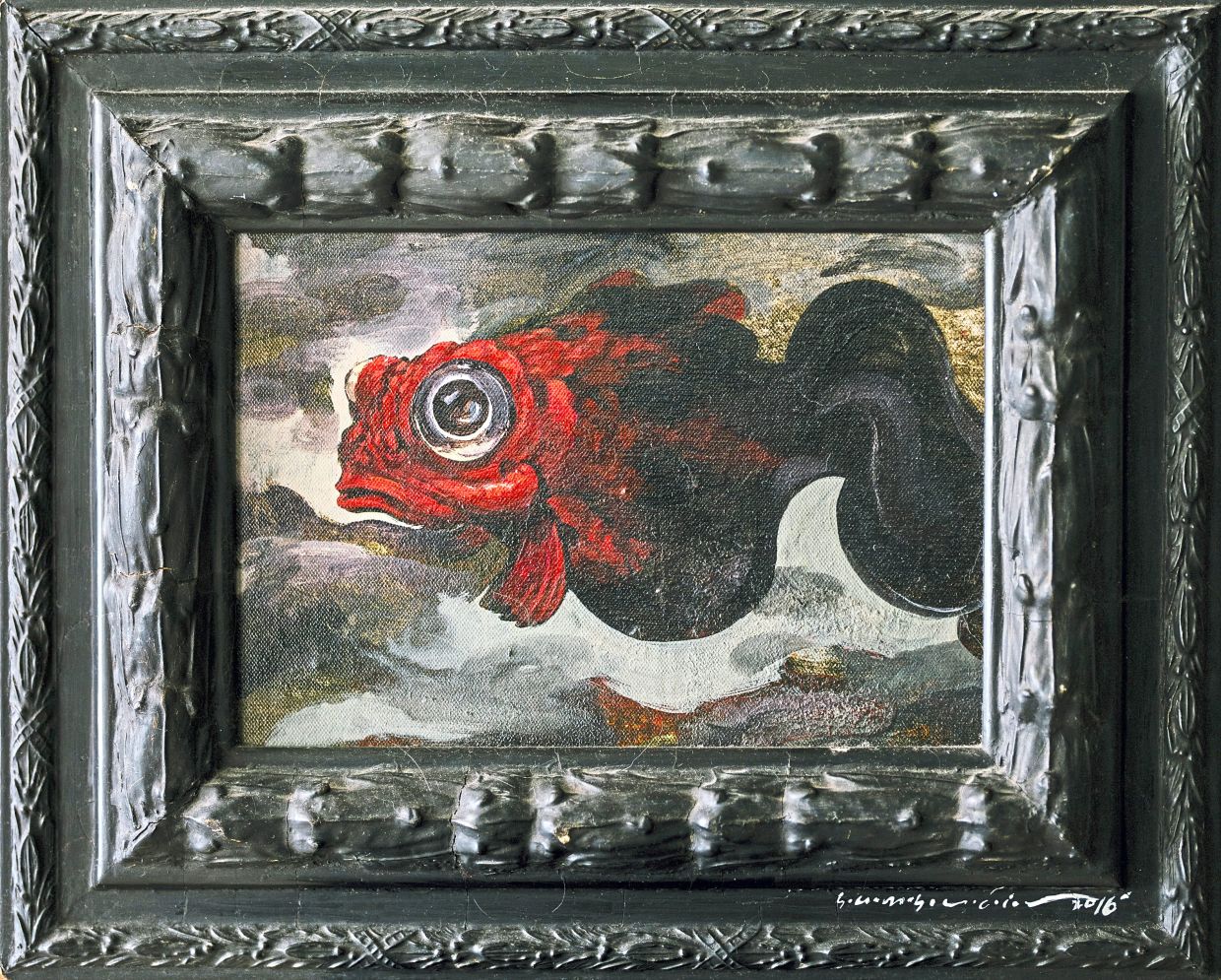 ‘Goldfish’ by Samsudin Wahab (oil on canvas, 2016), which inspired a hilarious chapter in the book. Photo: Dinn Diran

Ginger biscuits is self-published, a passion project that has reached readers beyond Nik’s Instagram followers, since its release a few weeks ago.

Fifty stories were selected, with each story accompanied by an image of the corresponding artwork.

For example, there’s a painting of a red teapot by Fauzulyusri featured here, a work that took Nik back to his childhood where a “terrifying garang (fierce) teacher” from school came to have tea with his mother every week.

“Who in the whole world would want their teacher to come to their house for tea?” I tried to persuade my mother to end her useless, ridiculous and traumatic friendship with my teacher. But of course, my mother being my mother, never listened to me,” he wrote in Tea at home.

The stories here are lively, sincere and easy to read. They range from childhood stories to observations of the world around him and conversations with artists. 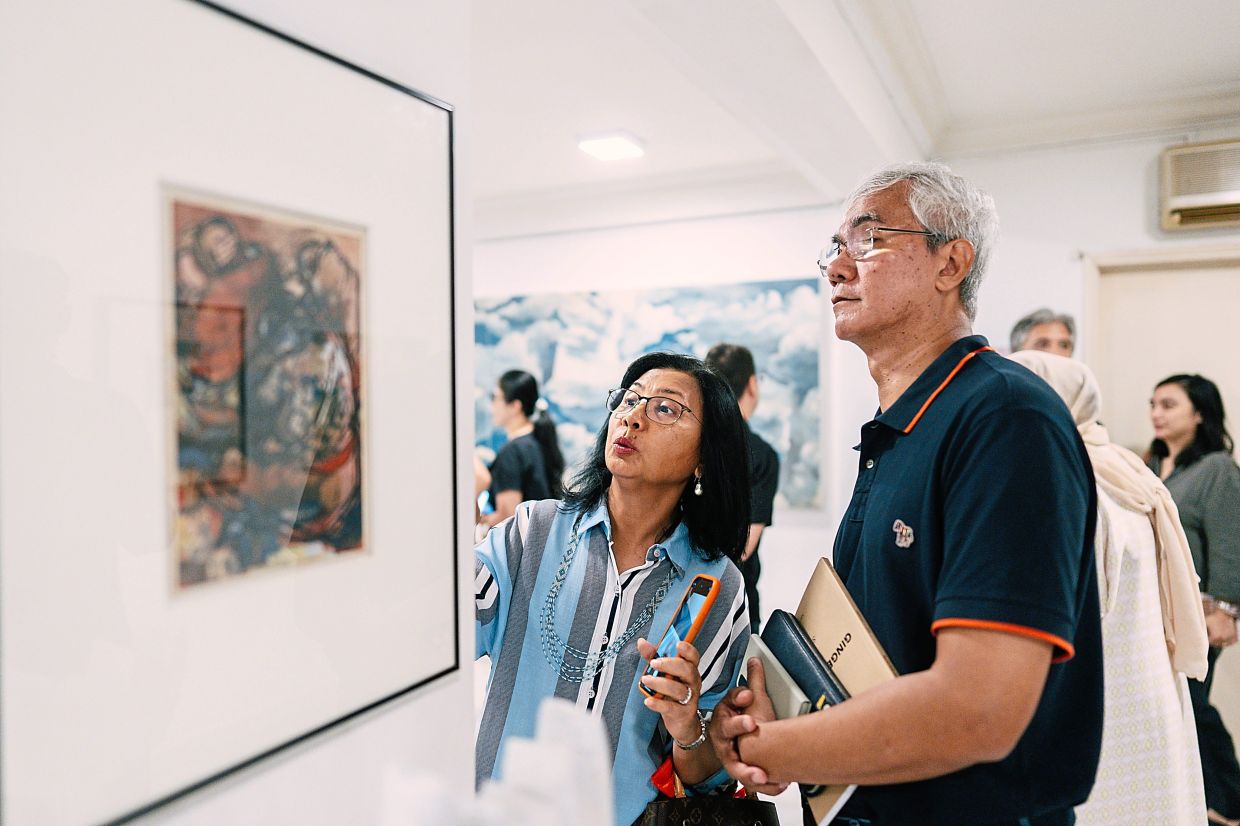 An exhibition of the works featured in the book “Ginger Biscuits” was held last month at the Cult Gallery in Kuala Lumpur. Photo: Saiful Chin

“Several people told me that they had read it in one sitting. One guy wrote to me, saying he didn’t know me and he didn’t know the art, but he loved the stories. Another woman, who knows the art world, told me that she wanted to give me a hug after reading the book. I never intended to earn money. money with this book, but it’s been very rewarding in other ways. I’m blessed because I can relate the artwork I love to the stories of my life, the people I meet, and the things I I do,” he says.

Nik also sees this book as an attempt to leave behind stories for his children and the younger generation.

He used to listen to the elders of his family tell stories from their childhood and finds it a pity that these were never recorded.

This storytelling project is an effort to document some of his thoughts and love for art.

In Ginger biscuits, he wrote a story about each of his four children. At the recent book launch at the Cult Gallery in Kuala Lumpur, he had them read these stories.

“I really enjoyed watching them read the stories I wrote about them. During the MCO, we walked around the house together and I asked them to choose their favorite works. They all have very different personalities and this is reflected in their choice of artwork as well as their observations and opinions on art. I wanted to go deeper into the minds of my children and understand why they love these works. A good work of art will stop you in your tracks, it will make you feel and think. I want my kids to feel the love and passion I have for art and stories,” he says.

Ginger biscuits is a compilation of stories and art, a personal project that turned into a book because it touched hearts and minds and will continue to do so.

Brad Bestelink is a modern-day bushman. The Okavango Delta has been his home since he was born there 44 years ago. His parents were pioneers in the photographic safari industry, replacing their guns with cameras. Bestelink found his passion and calling when he was still a teenager. At 16, he became Botswana’s youngest professional bush […]

Key Stage 1 teachers and students, join our Pride Month celebrations by attending this 30-minute event that celebrates family, adventures, and love in all its forms. Join author and illustrator Harry Woodgate (they/them) on Friday, June 10 at 10 a.m. for a book exploration session grandpa camper. Hear all about Grandpa and Grandpa’s adventures in […]